More about the Huguenot Crosses of South Carolina

April 22, 2011
The six Huguenot crosses in my state are identical (granite, same size) except for the two inscriptions. Each one has an inscription reading something like the following (brackets indicate elements that are absent or different on some crosses):
ERECTED A.D. [Year]
BY THE
HUGUENOT SOCIETY
OF SOUTH CAROLINA
[ON THIS GOD'S ACRE.]
Each cross also has another inscription that varies a bit more from cross to cross. I visited two of the six crosses earlier this month. The French Quarter, or Oranger Quarter St. Denis, cross was put in place in 1922. The Huguenot church here was built about 1687, or just two years after the revocation of the Edict of Nantes, stripping the French Protestants still in France of any remaining religious liberty they had. You can see the first inscription followed by the text of the back inscription in these two photos (click to enlarge and read better): 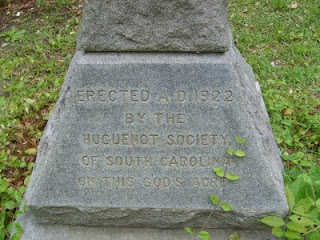 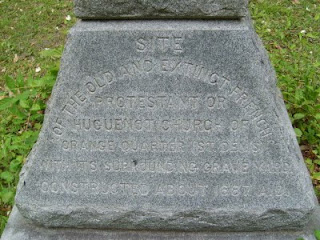 The St. John's Berkeley cross was put in place in 1928, so its first inscription is identical except for the year and minus the phrase "on this God's Acre." A Huguenot church was built here right around 1700, the turn of the century, so just a little while after the French Quarter church. Here is a photo of the cross's second inscription: 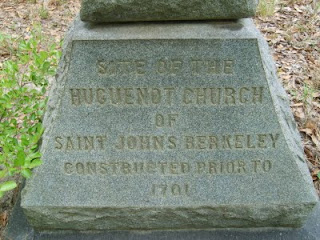 Popular posts from this blog

According to recent research, as reported by ScienceDaily, wisdom truly is an advantage gained by age. Notice the first sentence of the second paragraph--it gives the definition of wisdom in the study. Wisdom here is basically experience. That is not a bad definition, though wisdom is a difficult word to pin down. And biblical wisdom is certainly more than mere experience.

Jeremy Patterson
I study languages, particularly French. I teach French and Spanish at Bob Jones University. My interests include languages, linguistics, and theology. Two or three feeble (and thus understandably unsuccessful) attempts on my part to find good linguistics blogs, combined with inspiration from other well-run blogs, have led me to start my own language-related blog.

Decolonizing God: The Bible in the Tides of Empire
by Mark Brett
tagged: currently-reading

The Ethics of Immigration
by Joseph H. Carens
tagged: currently-reading